PANAMA CITY BEACH — Expected to be a “game changer” for Bay County, a new $41 million indoor sports complex will be the third major athletic facility in the Panama City Beach area.

Approved by the Panama City Beach Tourist Development Council on Friday, the 112,000-square-foot facility will be built on Chip Seal Parkway across from the Publix Sports Park on the Beach’s east end.

According to Dan Rowe, president and CEO of Visit Panama City Beach, his organization has been working to bring an indoor sports complex to the area for several years.

“The center is a game changer that will have positive benefits for Panama City Beach and all of Bay County,” Rowe wrote in an email. “With its ability to generate incremental non-summer visitation through sports tournaments and technical conferences, this facility will help strengthen and diversify our local economy.”

He added that the complex, which will be built on land donated by the St. Joe Company, will double as an emergency operations center to help with post-disaster response times.

“When we face challenges like those presented by Hurricane Michael (in October 2018), this facility will enhance our emergency management,” Rowe wrote. “In the aftermath of Hurricane Michael, a number of unmet community needs were identified to help in the emergency response following future (storms) or other related events.”

He noted that the complex will be funded by the TDC, the Federal Emergency Management Agency’s Hazard Mitigation Grant Program and the U.S. Department of Housing & Urban Development Community Development Block Grant. 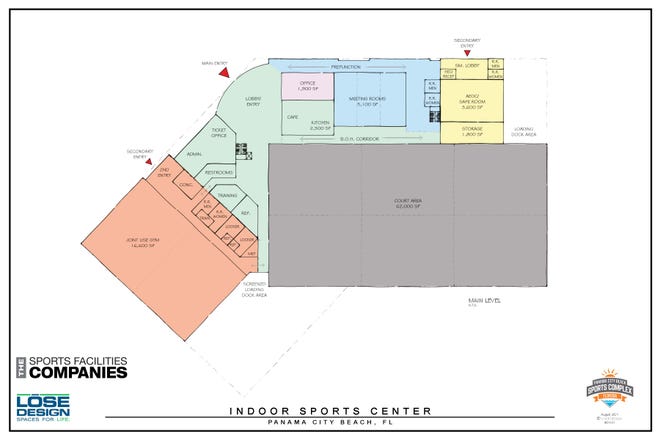 he TDC also plans to apply for help from Triumph Gulf Coast if additional money is needed.

Ground is expected to be broken toward the end of this year and construction will take about 18 months, officials said.

The Publix Sports Park, formerly known as the Panama City Beach Sports Complex, has experienced tremendous success since it opened in July 2018.

In its opening year alone, the park hosted 80,000 visitors, was responsible for the booking of 120,000 local hotel rooms and had an estimated $56 million boost on the community’s economy.

In the opposite direction on the west end of Panama City Beach, Frank Brown Park also draws tens of thousands of people to Bay County. In addition to sporting events, it hosts a number of annual festivals, including the Pepsi Gulf Coast Jam and the Thunder Beach Motorcycle Rally.

Rowe said he plans for the sports complex to be used for volleyball, basketball, wrestling, weightlifting, cheerleading, trade shows, exhibitions, meetings and conferences.

“The indoor center opens or expands new sports tourism markets,” he wrote. “The facility will be designed to (also) provide local technology companies and defense contractors with R&D spaces and the ability to conduct classified briefings.”