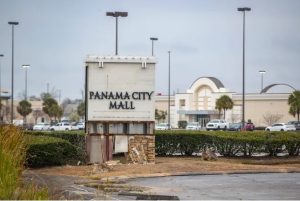 The Bay County Commission approved a proposed interlocal agreement with Panama City and the Panama City Redevelopment Agency toward an expansion of the Downtown North Community Development Area to include Panama City Mall, which has been mostly closed since Hurricane Michael in 2018.

Panama City and Bay County came to an agreement that the county can retain 15% of the tax levied by the county for the expansion area, meaning this amount will “allow the county to receive a portion of the new revenue from the expected redevelopment of the site for general government needs, while allowing Panama City to use the remainder of the tax to address the blight in the Downtown North CRA area.”

Bay County Commissioner Bill Dozier said the money that is generated in that area stays in that area, so all the growth there will be reinvested back.  “As (the base revenue) rises, then we will keep 15% of the revenue and so that money will go help and offset the cost for extra services that the county offers, from as far as ambulances, firetrucks, court, law enforcement,” Dozier said. “We’re across the board, that service continues to move forward. So, if that revenue is taken away, it hurts, but in this agreement, we continue to keep 25%, so that will help.”

Dozier said any drastic or immediate changes that will be felt or seen by residents will be made through the city, as well as the property owners of the mall. Overall, Dozier said this was a great partnership with Panama City and he was glad everything went well.  “This is a win-win for both the city and the county,” Dozier said. “And so instead of all of it going one way in this agreement, we’re able to share and help out all these services, so it was a good agreement.”