‘Great day in Bay County’: Central Moloney will create over 200 jobs at its new location 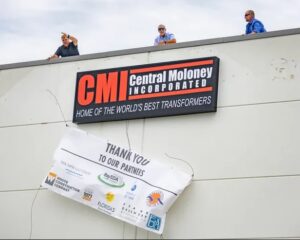 That was when she, local officials and members of the community gathered for a ribbon cutting ceremony to welcome Central Moloney Inc. to Bay County. The Arkansas-based company will soon open its sixth location, the first outside of its home state, creating more than 200 local jobs.

The group will operate out of an approximately 140,000-square-foot building that it will lease from the St. Joe Company. It sits off Venture Crossings Boulevard, just a few miles from the Northwest Florida Beaches International Airport.

“It’s a great day in Bay County,” Hardin said following the ceremony. “The fact they chose our area to come, grow, expand and put our citizens to work is a very important, important step for our local economy.”

A ‘godsend’:St. Joe Co. spearheading Bay’s rebirth. 31st project will be a game-changer

Chris Hart, president and CEO of Central Moloney, said his company works to manufacture and distribute electrical transformers and their components.

Hart noted his interest in expanding to Bay County was sparked by a “random cold email” from Florida’s Great Northwest, which works alongside the EDA to diversity the economy.

“We’re so excited,” he said. “This is a fantastic facility and a fantastic community, and we can’t wait to do what we do right down here in Panama City Beach. … This is now not just home away from home, but a part of the Central Moloney home-base.”

Hart also said the company not only will continue to service its entire network of utilities across the United States, but also work to supply to Northwest Florida transformers — something in a high demand, especially in the aftermath of hurricanes and other natural disasters.

He plans to hire employees at the new location in increments of 50, eventually employing about 200 to 250 people within about a year.

“For us, this is commitment to continuing growth,” Hart said. “The only way to coast is downhill, and we may enjoy the (Gulf) Coast while we’re down here, but there’s no coasting in what we’re doing. We’re not just coming to take part, we want to take over in our industry.”

According to Hardin, Central Moloney already has begun ordering equipment for its new location.

The EDA now is working with CareerSource Gulf Coast to develop a hiring plan, which Central Moloney will implement toward the end of summer, when it is slated to begin recruiting employees.

Hardin said she is confident the new addition will help attract other industries to also join the Bay County marketplace.

“I’ve worked in other communities, and I’ve been in Bay County for seven years, and I can say without a shadow of a doubt that Bay County has the best public-private partnership in that we are all focused on doing great things for the citizens of our community,” she said.