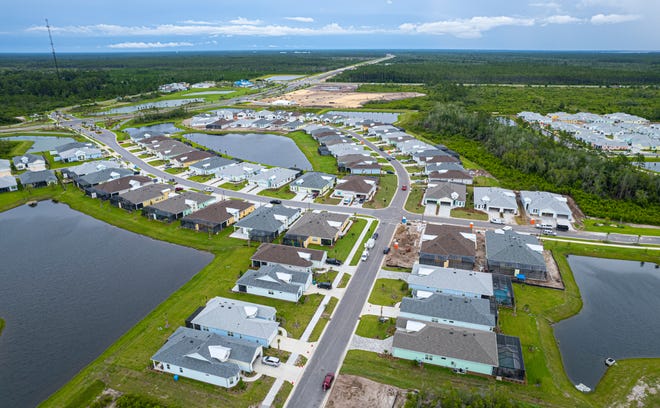 According to Minto Communities USA, Latitude Margaritaville Watersound was ranked 23rd in RCLCO Real Estate Consulting’s list of the 50 top-selling master-planned communities in the U.S. based on sales activity so far this year.

Located off State 79 north of Panama City Beach near Northwest Florida Beaches International Airport, the community is being built on land owned by the St. Joe Company through its partnerships with Minto and Margaritaville Holdings.

“In our first year (after) launching, it’s already made it to the top 50, so it’s definitely a strong testament,” William Bullock, president of the Minto division of Latitude Margaritaville, said of what it means for the local project to make the list.

Bullock said as of Tuesday, Latitude Margaritaville Watersound, which broke ground in 2020, has sold 760 homes with more than 300 others under construction. Its first phase of development boasts plans for 3,500 homes, and there is room in the surrounding area to build additional properties.

he community offers four styles of homes that range from about 1,200 square feet to more than 2,500 square feet. There are multiple floor plans of each style.

The local community is Minto’s third Latitude location. Its Daytona Beach site tied for 23rd on RCLCO’s list, and its Hilton Head, South Carolina, site was ranked 39. The company also had a fourth master-planned community on the list — Westlake in Palm Beach — that was ranked 31.

“To have all three Latitudes in the top 50 is pretty powerful, and we look forward to continuing that trend (as) we expand into other markets,” Bullock said.

The release notes that 2022 already has been a record-setting year for Minto. More than 1,100 homes have sold this year in its four communities recognized by RCLCO, which has annually ranked top-selling master-planned communities across the U.S. for almost three decades.

Bullock said he believes Latitude Margaritaville Watersound will have a tremendous impact on the future economy of Panama City Beach and all of Bay County.

With immense construction underway and much more in the pipeline, the community will continue to create hundreds of jobs. It also will attract thousands of new residents who will shop at local businesses and generate a surge of tax collections for the area.

ullock said he expects Latitude Margaritaville Watersound within the next couple of months to hit its target of selling 50 homes, beginning construction on 50 homes and having 50 new buyers move in every month.

“And that’s just the beginning,” he said. “As we build our labor pool and the community matures, we expect that number to increase.”