PANAMA CITY BEACH — After much anticipation, efforts to expand U.S. 98 in Bay County are finally underway. 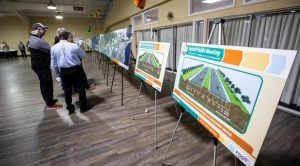 The Florida Department of Transportation hosted a hybrid public meeting on the proposed widening of US 98 at the Lyndell Conference Center Thursday, January 27, 2022.
MIKE FENDER / THE NEWS HERALD

According to Ian Satter, spokesman for the Florida Department of Transportation, the project to widen the road from four to six lanes will be broken down into two phases — the first of which is about 60% designed and should break ground in the spring of 2023, with construction slated to last about two years.

Estimated to cost about $64 million, the first phase contains two segments that will be simultaneously constructed. One spans from Mandy Lane to Nautilus Street (about $33 million), and another runs from Nautilus Street to Richard Jackson Boulevard (about $31 million).

On Thursday afternoon, FDOT hosted a hybrid public meeting at the Lyndell Center in Panama City Beach for residents to get information about the development.

“This particular stretch of roadway on U.S. 98 in Bay County has been at the forefront of the Bay County Transportation Planning Organization’s priorities, so being able to work with them and be able to fund this project is going to be essential to keeping traffic moving there for the people who live, work and visit (the area),” Satter said.

Satter noted the second phase stretches from Richard Jackson Boulevard to the Hathaway Bridge. It is estimated to cost about $60 million and does not yet have funding or a timeline.

He also said one of the main reasons FDOT has broken the project down into segments, rather than constructing all the improvements at once, is because that makes it easier for his department to acquire funding from the state.

“Two of them should be starting around the same time … (so) the good news is because those are funded and will be under construction in 2023, it will make it easier for us to be able to program and acquire funding to do that additional segment from Richard Jackson to the bridge.”