What are your thoughts as Panama City Commissioners moves forward on the new marina civic center?

The Panama City Commission approved on Tuesday the motion to enter a professional contract for architectural and engineering services for a new Panama City Civic Center. 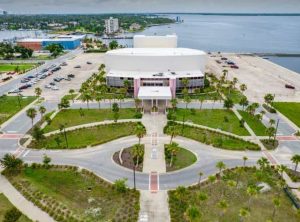 PANAMA CITY — Residents soon might get to see some of their favorite artists and entertainers perform again, if all goes according to plan.

The Panama City Commission approved on Tuesday the motion to enter a professional contract for architectural and engineering services for a new Panama City Civic Center.

The currently defunct civic center is on the marina in downtown Panama City and was severely damaged by Hurricane Michael in 2018. City officials in July sought competitive proposals from architectural and engineering firms to handle the project. Officials narrowed the submissions down to four firms, each of which gave public presentations in October.

Signing with Wilson Butler-Fentress in January, city officials said they want residents to know that the contract is a necessary first step to answering a lot of their questions and concerns.

“What we have to do is just the first step into a market analysis, which means ‘how many people can we have there, what kind of market does our city have, what can we draw in, and those kinds of things,'” Commissioner Jenna Flint Haligas said. “We don’t know how big it needs to be. We don’t know where we’re going to put it. We don’t have any of those things, so this is the first step in trying to determine those things.”

Phase 1 and 2 of the contract

Phase 1 of the contract will include market analysis, concept design and site selection, all of which will involve community engagement sessions. According to the item agenda, the task order will take approximately six months to complete. The firm’s not-to-exceed budget is $759,780.

Phase 2 of the contract will include detailed designs of the PAEC facilities and construction administration, with services continuing for the duration of construction and commissioning. The firm’s not-to-exceed budget is $10,494,000.

Some residents at the meeting voiced their support to move forward with the contract, including local college officials from Gulf Coast State College and Florida State University Panama City. They both cited the need to have a space for students to be able to have events and hold graduation ceremonies.  Other residents, like Kevin Elliot, who has voiced his opinions and helped in committees about the civic center, discussed their thoughts on the matter. He said while phase one made sense, his concerns were with the city having to find the funding for the project and not the other way around.

Commissioners listened to each speaker and discussed their thoughts on the contract, stressing again that these designs and studies are necessary for the project to continue.  Haligas said the city does not yet have the funding for the project, but officials are working to find the money. She said they will be going after Triumph funds and new market tax credits, as well as FEMA funds, adding that there is a lot they can go after to not burden local taxpayers.  “We are in arbitration with FEMA and we have insurance funds and we will be going after fund money,” Haligas said. “So, we don’t try to build something, unless we have all the grant money we need to build a civic center.”

“They’re going to be doing all the studies, all of the economics how this would be funded, what funding is available to do it,” Street said. “This team is being tasked with that. And so, while it is a lot of money that we’re spending here, right out of the gate, it’s a whole lot less than potentially making missteps on an incredibly large project.”

Some residents’ posts online also expressed frustration with the civic center project — with some concerned the city is spending money that it doesn’t have available. Haligas said it all comes down to miscommunication and the city is taking these necessary steps so officials can go out and get grant money. “There’s a large chunk of the community that strongly suggests and really supports us doing this step one, you just can’t always make everybody happy,” Haligas said. “And part of that is communication with the public is to make sure they understand that like, we’re not just going to go out and build something and take a loan out for it.”

Street also said officials take these concerns seriously and to heart, adding their hope is when the team comes back, they’re going to have financing options and grant funding available to them.  “So, we are spending money, but we’re spending money to make sure that we do it correctly and that we can get it to construction,” Street said. “If we can’t, then we’ll pull the plug and we’ll move on with something else. But this is that part of the process where we’re actually trying to ensure that we get the funding in place to do these things.”

City officials also addressed concerns, saying they will not raise taxes to pay for the center and will address infrastructure issues, looking to build a better center than how it was before.  After having lost the old civic center, residents deserve the best, Haligas said. As an advocate for the local arts community, Haligas said it just makes sense that the city rebuilds it.  “It’s hard to imagine a city of our size or a county of our size not having a civic center,” Haligas said. “So, I think it’s very important. It was a staple before, even though it was rundown and it needed to be rebuilt and it needed new technology and it needed all of that, it still was very much appreciated by the arts district.”